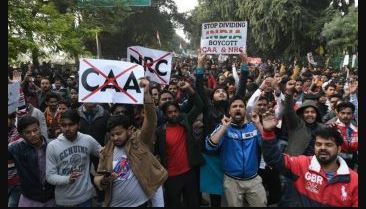 Violence found in West Bengal during the protest against the Citizenship Amendment Act (CAA) and the NRC (National Citizenship Register).

The violence raised after a clash TMC leaders and locals on Wednesday, 29th January, in Jalangi area of ​​Murshidabad. A huge number of police forces have reached the spot.

TMC workers were protesting on the road. Local people opposed it and clashes raised on both sides. The clash rapidly turned into violence.

2 people have died in this violence, as per the sources. Apart from this, 5 people are seriously injured.

Violence raised in Jalangi area of ​​Murshidabad following a heated debate between the local TMC leader and people protesting against the CAA. 1 person died in this violence while one is being reported missing and 5 people are seriously injured.

On the violence in Bengal, Congress leader and MP Adhir Ranjan Chaudhary bashed out at the TMC and BJP, saying that the TMC workers attacked with guns and bombs. His leader is also bloody, he attacked the citizens.

He further said that TMC has guns and bombs in West Bengal. The administration and police work for them, they do nothing. People of TMC are goons and I know this many times.

Chaudhary said that now the BJP also has bullets and bombs, so the situation of West Bengal is getting worse and worse. If he wants, he can stop all this because the government at the center belongs to him and the police belongs to him. NIA can be sent from the center. Can tell the CBI that it can stop it.