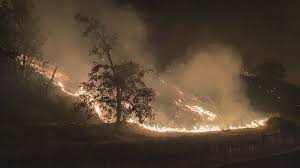 Although, authorities stated the town of Vida is still standing, contradicting what Gov. Kate Brown stated in a press conference previously within the day. Leaburg & Walterville are also relatively untouched.

Within the Mohawk Valley, authorities stated there is fire within the valley, however no structures were destroyed.

There is still no word on wounds & casualties from that Holiday Farm Fire.