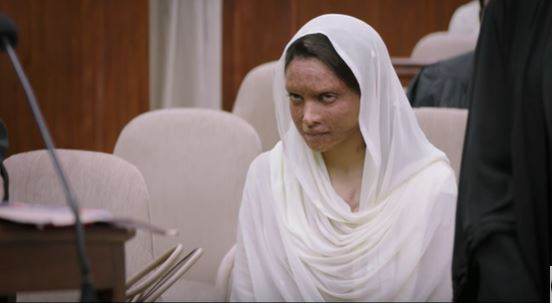 A few days prior to its release, Deepika Padukone’s Chhapaak found itself lands in legal controversy after a writer named Rakesh Bharti claimed writing credits for the film and said that he had written the original attack survivor’s script on which the Meghna Gulzar-directed film is based.

Chhapaak is an upcoming real-life based Hindi-language movie directed by Meghna Gulzar and produced by her as well as Deepika Padukone in collaboration with Fox Star Studios.

In this movie, Deepika Padukone is playing an acid attack survivor, inspired by the journey of Laxmi Agarwal who has won hearts with her bravery and unconquerable spirit.

The English activist and TV presenter Katie Piper, who is also a survivor of acid attack praised the film
massively.

Deepika Padukone quickly responded to Katie Piper and shared this message on Twitter; “Thank you so much for your shout out Katie and I look forward to meeting you sometime soon” Ms Piper replied to say that she too is eager to meet Deepika: “I feel so hopeful for change your movie will make in society.

Thank you. I&#39;m looking forward to meeting you” Chhapaak will be theatrically released in India on 10 January 2022.The movie is reportedly being shot in various locations across Delhi.

The first look of the Deepika Padukone from the film have stunned her fans which shows her revolution to look like Laxmi Agarwal, on whose life the film is based. Deepika Padukone is playing the role as Malti. The film covers the lifetime story from the investigation of the attack to the court proceedings and the medical treatment to emotional healing.

Deepika Padukone in and as Chhapaak Laxmi who was born to a middle-class family in Delhi dreamed of becoming a singer one day. In 2005, Laxmi was on her way to a bookshop in Khan Market, was confronted and attacked by Naeem, who attacked her with acid. She lay on the street, writhing in pain, until a taxi driver came forward and took her to the nearby Safdarjung hospital.

But the horrific attack could not let her down. In 2006, she filed a Public Interest Litigation in the Supreme Court and sought a total ban on sale of acid. In 2013, the court ruled in favour of her plea, and imposed restrictions on the sale of acid. The same year, Laxmi also became an activist for Stop Acid Attacks, founded by Alok Dixit and Ashish Shukla.

As Laxmi became the voice of acid attack survivors, she was honored by former First Lady Michelle Obama with the International Women of Courage Award.