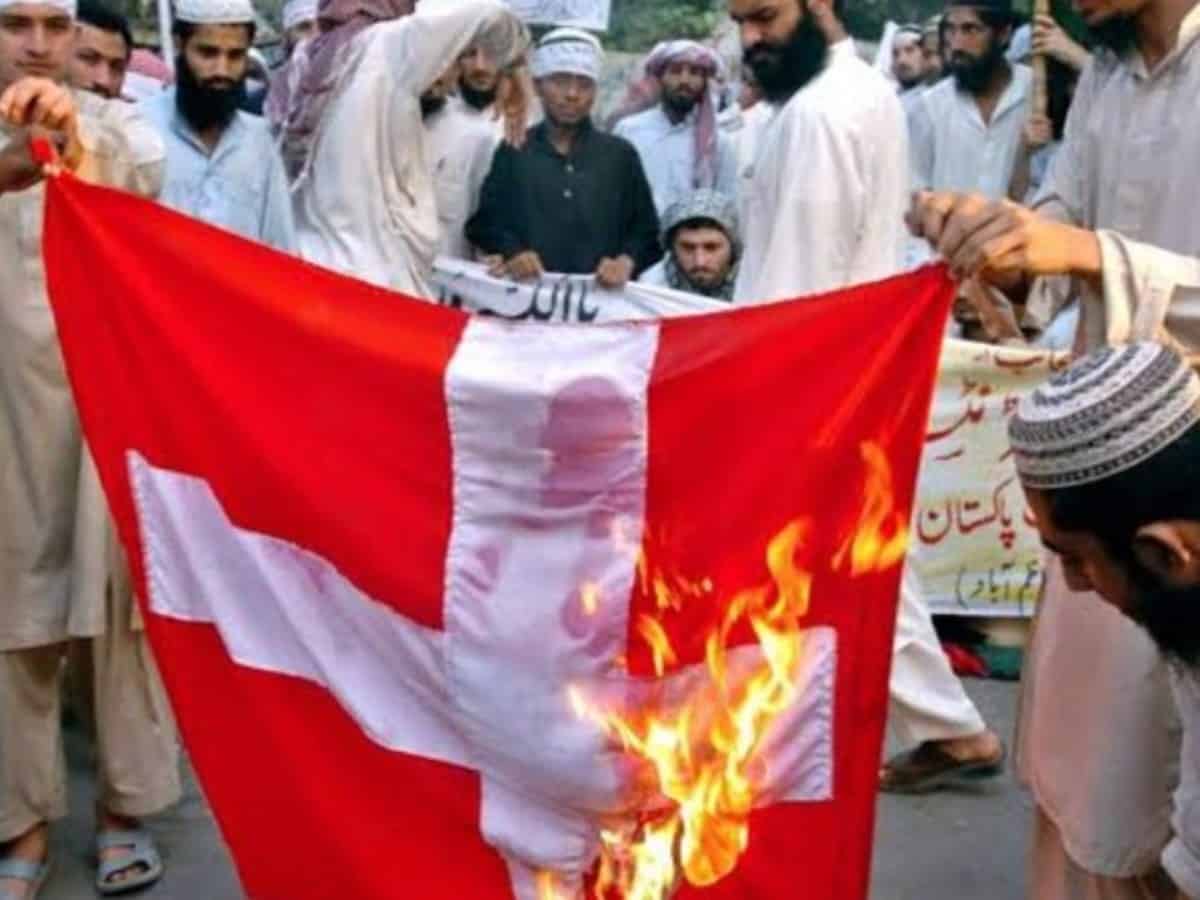 New Delhi(DL): The Swedish city of Malmo seen raging violence on Aug 28 aftera copy of the Quran has been burned by members of a far-right Danish party. A day after, records of quarrels in Norway breaking out throughout an anti-Islam protest also appeared.

Amidst this, an image purportedly demonstrating Muslim refugees in Switzerland burning the Swiss flag went viral on social media(SM). As per the claim, Muslim people burnt the Swiss flag in 2019, insisting the removal of the Cross from that flag.

The caption to one of the image posted on Twitter read, “Previous year #Muslim #refugees in #Switzerland insisted removal of #Cross from that #SwissFlag. Just how thankless a society could be to a nation that has given them refuge on their own homeland?”

India(In) Today Anti Fraud Information War Room (AFWA) has identified that the claim is false. This is an old image from Pakistan(PAK), in circulation from 2016. The flag being burnt within the image is not Swiss however Danish.

With a reverse image search, we identified that the same image was on social media(SM) at the least from 2016 with similar says.

Also, with a simple Google search, it has been evident that the flag within the viral image is not the flag of Switzerland however the Denmark flag.

The flag of Switzerland has a white cross with equilateral arms within the center of a square red ground. On the different hand, the flag of Denmark that is also red in color has an off-centre white cross that extends to the edges of the flag – as witnessed within the viral image.

On furthermore search, we identified that the image is part of a 2006 outrage that hit multiple Muslim nations following the publication of cartoons featuring prophet Mohammed in a Danish news paper.

We identified the image posted on the British-American stock image website, Getty Imagesin the yr. 2006. As per the website, the image has been taken in Pakistan(PAK) on Feb 23, 2006, by photographer Rizwan Tabassum for AFP.

The Prophet Muhammad Cartoon controversy erupted after a Danish news paper Jyllands-Posten posted a dozen cartoons of the Prophet within the headline “The Face of Muhammad” on Sep 19, 2005.

Thousands dissented & hundreds passed away in a world-wide dissent over the cartoon in 2005 & in 2006. Multiple western news papers reprinted cartoonist Kurt Westergaard’s cartoon, the 1 that had caused the controversy, in dissent of an claimed plot to murder him.

The image in query has been taken throughout one of the dissent over the reprinting of the cartoon by this western news papers. The protestors have been angry regarding the cartoon, not the cross on the flag. Also, no reliable media record has been identified about the torching of the Swiss flag by this Muslim society in Switzerland.

Image shows Muslim refugees in Switzerland burning the Swiss flag in 2019 insisting the removal of the cross from that flag.

This is a 2006 image from Pakistan(PAK) where citizens burnt the Danish flag dissenting the depiction of Prophet Muhammad in Western news papers.