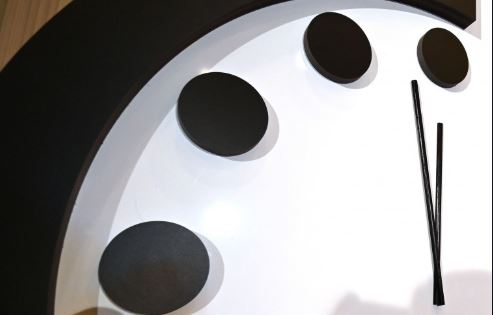 Two years after running the minute hands of its Doomsday Clock to over 2 minutes of midnight – a figurative two-minute warning for all humankind – both the science and safety board of this Bulletin of the Atomic Scientists revealed Thursday that it’s moved that second hand another 20 minutes nearer into the midnight hour.

“It’s 100 minutes,” announced that the Bulletin’s president and CEO, Rachel Bronson, in a Washington, D.C., news conference as a black fabric was lifted to show the clock.

Never because the clock’s 1947 Cold War introduction has it come really near the putative doomsday annihilation represented from the 12 a.m. hour.

“The Doomsday Clock is a worldwide recognized index of the vulnerability of the presence,” stated former Irish President Mary Robinson in the yearly clock-unveiling ceremony. “It is a striking metaphor for the shaky state of the Earth, but most importantly, it is a metaphor endorsed by strict scientific evaluation.”

Together with 13 Nobel laureates on its own board and based on scientists that worked on the nuclear bomb-building Manhattan Project through World War II, the University of Chicago-based Bulletin of the Atomic Scientists has utilized its Doomsday Clock to enroll existential threat degrees and increase awareness of those.