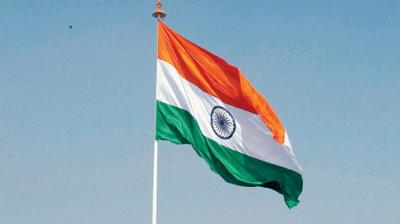 On July 22, 1947, when members of the Constituent Assembly of India(In)(In) met in the Constitution Hall in Delhi(DL)(DL), the first item on the agenda was reportedly a motion by Pandit Jawaharlal Nehru, about adopting a national flag for free India(In)(In).

It was proposed that “the National Flag of India(In)(In) shall be horizontal tricolour of deep saffron (kesari), white & dark green in equal proportion.” The white band was to have a wheel in navy blue (the charkha being replaced by this chakra), that appears on the abacus of the Sarnath Lion Capital of Ashoka.

While the finer nuances were subsequently discussed in the meeting, the final design of the Indian National Flag, hoisted by PM Nehru on August 16, 1947 in Red Fort, had a history of several decades preceding independence.

While an Indian flag was reportedly designed by Sister Nivedita, an Irish disciple of Swami Vivekananda, between 1904-1906, arguably the first national flag of India(In)(In) is said to have been hoisted on August 7, 1906, in Kolkata in the Parsee Bagan Square (Green Park).

It comprised three horizontal strips of red, yellow & green, with Vande Mataram written in the middle. Believed to have been designed by freedom activists Sachindra Prasad Bose & Hemchandra Kanungo, the red strip on the flag had symbols of the Sun. & a crescent moon, & the green strip had eight half-open lotuses.

Next year., in 1907, Madame Cama & her group of exiled revolutionaries hoisted an Indian flag in Germany in 1907 — this was the first Indian flag to be hoisted in a foreign land.

The origins of the present-day flag

The design of the Indian tricolour is largely attributed to Pingali Venkayya, an Indian freedom fighter who reportedly first met Mahatma Gandhi in South Africa during the second Anglo-Boer War (1899-1902), when he was posted there as part of the British Indian Army.

Yrs. of research went into designing the national flag. In 1916, he even published a book with possible designs of Indian flags. Within the All India(In)(In) Congress Committee in Bezwada in 1921, Venkayya again met Gandhi & proposed a basic design of the flag, consisting of two red & green bands to symbolize the two main communities.

Hindus & Muslims. Gandhi arguably suggested adding a white band to represent peace & the rest of the communities staying in India(In)(In), & a spinning wheel to symbolize the progress of the country.

Several shifts continued to be made till a decade thereafter, when in 1931 the Congress Committee met in Karachi & adopted the tricolour as our national flag. Red was replaced with saffron & the order of the colours was changed. The flag was to have no religious interpretation.

A Flag for Independent India(In)(In)

The Tricolour was altered to become the flag of Independent India(In)(In). Saffron on top symbolises “strength & courage”, white in the middle represents “peace & truth” & green within the bottom stands for “fertility, extension & auspiciousness of the land”.

The Ashok Chakra with 24 spokes replaced the spinning wheel as the emblem on the flag. It is intended “to show that there is personal personal life in movement & death in stagnation”.

Controversies regarding its creator

In 2013, a controversy arose when historian Panduranga Reddy stated that the national flag was designed by Hyderabad(Hyd)(Hyd)-born Surayya Tyabji.

With the resolution in the Constituent Assembly mentioning no names, the attributions are open to argument.

While there is no consensus on who recommended the change from charkha to the Ashok Chakra in 1947, in 2018, in an article titled “Just just how the Tricolour & Lion Emblem Really Had come to Be”, Laila Tyabji, founding member of crafts NGO Dastkar, wrote that her parents, Badruddin & Surayya Tyabji, had suggested the change.

The website of the Flag Foundation of India(In)(In), a non-profit organisation formed by industrialist & Congress politician Naveen Jindal, states, “The design of the National-flag for Independent India(In)(In) submitted by Mrs. Suriaya Badr-ud-Din Tyabi was finally sanctioned & accepted by this Flag Committee on 17th July 1947. She was an artist of repute & her spouse B.H.F.Tyabji (ICS) was afterwards a Deputy Secretary in the Secretariat of the Constituent Assembly.”