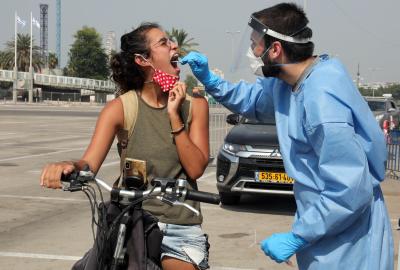 Tel Aviv, September 7 : A special Israeli ministerial committee has ruled to enforce a night curfew in 40 cities & towns with high COVID-19-19 morbidity beginning from Mon., as per a govt announcement.

The curfew going to be in enforce from Seven p.m. to five a.m., Xinhua press agency quoted the joint announcement released by Israeli PM’s Workplace & Ministry of Health as informing on Sun..

In these cities & towns, gatherings of over 10 citizens indoors & 20 outdoors going to be banned, awhile educational institutions & kindergartens going to remain closed.

The 40 cities & towns have been declared “red” in the context of a govt “traffic light” programme, that has classified all cities & towns in Israel into red, orange, yellow & green as per morbidity level.

The number of deaths rised to 1,019 with 12 new fatalities, awhile the amount of sufferers in severe condition rose from 439 to 453, out of 922 sufferers presently hospitalized.