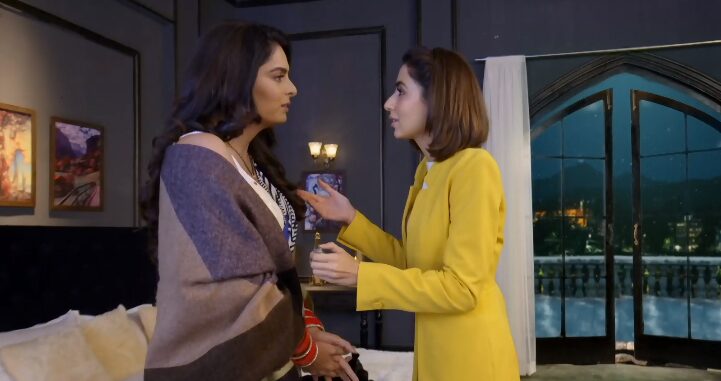 Today’s Written Episode: Kundali Bhagya 29th December 2023 Daily Serial Starts With Mahira and karan enter the house, the entire family is shocked to see them both together so stand up, Mahira has held her hands closely and is crying while Karan is angry.

Karan explains how he saw that that some goons were teasing Mahira and he saved her after which they both went to their room while he was waiting for Preeta because she was not there meanwhile he had some drinks and then something which should not have happened occurred as he slept with Mahira in the same room, hearing this everyone is shocked.

Preeta also comes from behind mentioning that there is nothing to worry about as she knows he cannot do anything wrong and has not taken anything from her, Karan explains that it is not right because the right which she had over him, he gave it to Mahira however because of what has happened he is asking that she should go back to her house as there is only one way left and he must marry Mahira.

Mahira mentions that it is not so as she went with Karan on her honeymoon then why did he come close to her, it is because he could not get away from her even when he desired to, Sherlin also starts blaming Preeta saying that she wrongfully married Karan and even sent a legal notice to their house because of which Mahesh uncle got ill.

Preeta stops her saying that she should not blame her because she also knows who is really behind it all and she did not have anything to do with it, Mahira mentions that she tried calling everyone but when karan himself desired to come near her then what could have she done because she is a girl and could not fight with karan.

Preeta explains that she has not deceived Karan and even when she married him in disguise it was not to ruin the life but to save the family from her because had she not married him, Sherlin and Mahira would have killed Mahesh Papa that night, hearing this everyone is shocked, Preeta explains how they both have always tried to harm the family and Mahira pushed Mahesh papa at the function of Holi.

Preeta mentions that Mahira should not be mistaken as this is her house because she is the wife of Karan and would never leave the house, Karan then gets tensed so asks Preeta to go back to her house as he has to marry Mahira, Sherlin thinks that if this happens then it would the most occurring thing in her life but it only is depended on the honeymoon that happens between karan and Mahira.

Preeta thinks that she has realized what is happening as Karan thinks it is Preeta with her in the room, Preeta calls Shrishti explaining that they have to call the police, Shrishti exclaims that she doesnot have any plan because how would they call them, Preeta taking up the tablet exclaims that it has connected to the internet of the resort and now they can call anyone for help.

Mahira is with Karan in the bed, she exclaims how she went through a heartbreak when he left her but the pain is nothing as compared to the lust to get him, she is about to get close to him when there is a knock on the door, Mahira orders the person to leave then goes to open the door in anger, she is shocked to see the police standing there.

They are adamant to search the room however Mahira exclaims that she cannot let them however the inspector refuses to even talk with her saying that she would be questioned in the police station. The police inspector enters the room and is tries to wake Karan, she asks from the manager about the identity of the girl.

They then arrest Mahira and when she questions about the reason, the inspector asks if she is Preeta, Mahira refuses, then the inspector says that this is the reason because Karan listed Preeta as his wife. Mahira mentions that she is the wife of Karan, the police ask for the proof as she doesnot have the Sindoor and Mangal Sutur, Mahira stops them and tries to wake up Karan, she thinks of why she had to give Karan the second tablet.

The police arrest Mahira after she changes when she is in the hall the journalist comes and is questioning Mahira about what she is doing in the resort, Mahira gets angry and also fights with them but the police take her to the station. Mahira reaching the police station, refuses to go in the cell and is constantly threatening the constable.

They explain how they hear the same dialogues everyday so she should stop talking as she has been charged and caught while doing the crime, Mahira is standing when the inspector comes inquiring why is she not in the cell, Mahira demands that she been given a chance to call, the inspector agrees saying that she is sure.

Mahira would not be able to prove that she is the wife of Karan because of how she was caught as Karan was drugged and she would have taken his advantage then blackmailed him for the rest of his life. The inspector hands her the mobile phone, Mahira decides to call Karina because she would tell them all who she is, Mahira then decides to call her mother because it is very late and she might have gone to sleep.

Ramona answers the call after waking up, the police inspector says that no one would come to her aid and she should be arrested, Mahira then decides to call Sherlin saying hat she would tell them who she is, the constable takes the mobile from her because it was her last chance.

Shrishti enters the room of Sherlin, she opens the door to let Preeta enter, Shrishti explains that she desires to harm Sherlin however Preeta stops her saying that she would take the revenge, they stop when she sees that the inspector is calling Sherlin, she answers the call and when the inspector asks if she can come to the police station, Preeta agrees to come, Mahira gets relaxed and threatens them all of severe consequences. Preeta and Shrishti both are walking towards the reception of the resort while on their way to the police station, Preeta remembers how she confronted Mahira in the hall and that is when Sherlin hit her from behind with a vase.