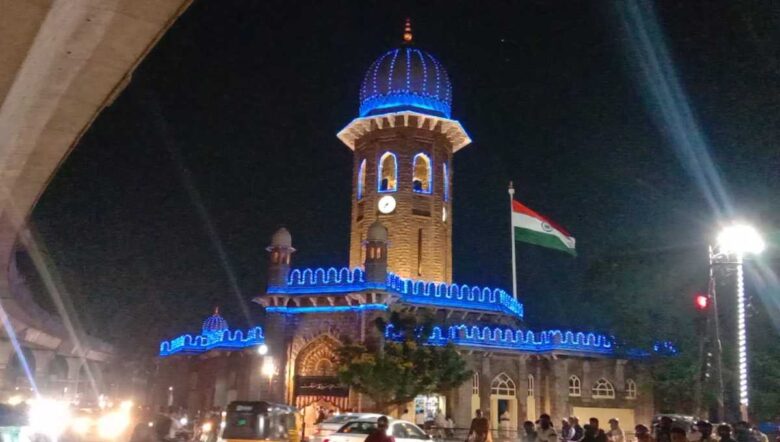 Hyderabad: After years of neglect, the Nizam-era Moazzam Jahi Market has been restored to its past glory once again, and it is all set to reopen on Independence day (Saturday).

The market area, built in 1930s has been ridof all encroachments and now also exhibits interpretation panels with historical and architectural information.

The transformation of the heritage structure began after Arvind Kumar, principal secretary (MA&UD), decided to adopt and restore it a few years ago.

A walk through the market area is nothing short of a miraculous change in its aesthetic from two years ago before restoration work began. In fact, due to the lack of a drainage system in the original structure, the market used to get flooded with water during rainfall.

Among other architectural interventions, the Moazzam Jahi market now also has a storm water drain system which has been put in place to avoid water logging.

The restored market, which was inaugurated by state IT minister K. T. Rama Rao on Friday eveing, will also have all the required historical and architectural information that one needs to know about the structure and its relevance. Under the supervision of the Greater Hyderabad Municipal Corporation, the entire process of restoration has been documented through photographs, a film and compiled into a coffee table book by film/documentary maker Dulam Satyanarayana.

“It definitely looks much better now. People here should also be informed on how to deal with heritage structures by the state government.

Otherwise the general public will end up only damaging those by using cement, like in the case of Moazzam Jahi market,” said Abdul Rahim, a long-time worker at the market.

The Moazzam Jahi market, constructed in the Indo-Sarcenic (also known as Osmanian) form of architecture, was part of the modern infrastructure built during the reign of Osman Ali Khan, the seventh and last Nizam of the princely state of Hyderabad.

The board had been set up to modernize the city, after it was first affected with the 1908 devastating Musi river floods and later by the bubonic plague in the following years (from 1912).

The proposal to construct the Moazzam Jahi market was made in 1932 by the board to the Nizam and it was approved in 1933. An estimate of Rs. 3,00,000  was sanctioned, and the market was completed in 1935. It was named after Nawab Moazzam Jah Bahadur, the second son of Mir Osman Ali Khan.

This market stands on a triangular site covering an area of 1.77 acres with 120 shops. The building is made of granite stone and the ceiling of the market is built with Jack arches containing iron beams.

In particular, a lot of Hyderabad’s heritage structures, many of which are still used as government offices, were constructed during the time of Osman Ali Khan (1911-48).

The High Court, Government City College, Osmania University, Osmania General Hospital, etc., are some of them.

If MJ Market can be restored, why not OGH?

While the restoration of Moazzam Jahi Market by the state government must be lauded, it also throws up the question: why can’t Osmania General Hospital (OGH), which has been sealed after it was flooded with rain water last month, also be restored? Both OGH and the market had a similar trajectory in terms of how those were treated; with apathy.

As part of its restoration, the Moazzam Jahi Market’s roof had tremendous growth of vegetation which had to be cleared from the root and the cracks in the structure had to be stitched technically. Apart from that, expert also had to remove three layers of tar which was added by the shopkeepers over the years to prevent water leakage.

There were similar instances of neglect and improper interventions over decades, which had to be dealt with.

It may be pointed out that OGH’s main building was completed in 1925 and designed by the architect Vincent Esch, also has similar problems. But there seems to be no intention to restore it, as the heritage building today lies shut.

It took only two years to restore Moazzam Jahi Market, and in spite of a detailed report prepared way back in 2013 to conserve and restore OGH, it is still being neglected.