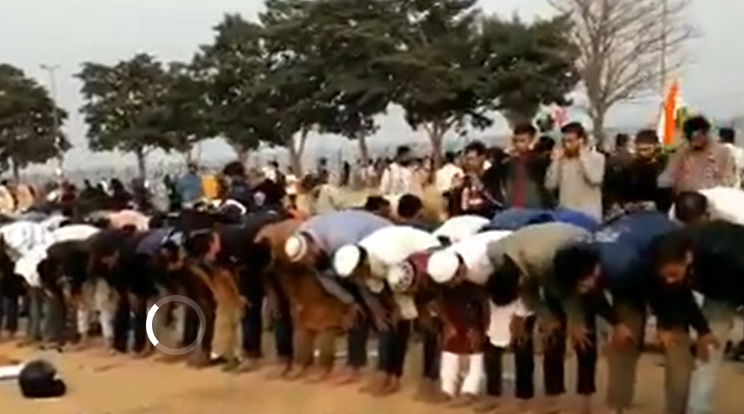 Hyderabad: The Hyderabad police have claimed as many as 14 people were taken into custody at the historic Mecca Masjid here on Friday. Protesting against the CAA and NRC.

The 14 people taken into preventive custody were let off afterward,” Assistant Commissioner of police Charminar B Anjaiah Said.

#HyderabadProtest against CAA, NRC and Killings of muslim youth in Lucknow protest at Charminar, Hyderabad after Jummah Namaz at Mecca Masjid.#lucknowprotest#AgainstNRC #AgainstCAA pic.twitter.com/uzsGE2HOnR

To offer the Friday prayer a large number of people gathered, they shouted slogans against the new bill NRC and CAA.

As the number of protesters was increasing, the police personals present at the spot dispersed them.

Prayers at the Mecca Masjid passed off peacefully apart from the sloganeering against NRC and CAA , Mr Anjani Kumar said.

There have been quite a few incidents of protests by many organizations including students and political parties’ against NRC, CAA and CAB for the last few days.

In Kamareddy protesters walked up to three kilometers to submit a memorandum to the district collector.

Meanwhile, Congress has been condemning actions of BJP government and expressing its solidarity with students and citizens in their struggle, Congress president Sonia Gandhi accused the government of using brute force to suppress people’s voice in the protest against NRC and CAA which is unacceptable in a democracy said in a statement addressing fellow citizens.

The statement is issued while there are protests across the country against the CAA and the NRC. Incidents of violence, stone-throwing and police firing on protesters have been noted.

“The CAA is discriminatory and the proposed nationwide NRC will in particular hurt the poor and vulnerable said Mrs. Gandhi”