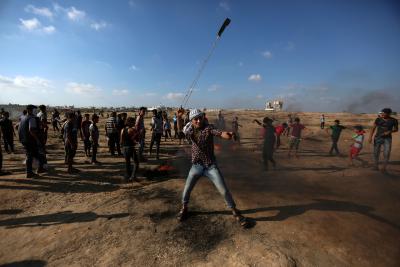 The hordes came out from al-Omari main mosque in Gaza city, waving flags & chanting slogans over the UAE. They marched the main street & came together in Palestine square in this city’s downtown.

They carried banners writing “Palestine is not for sale” “No for normalization & no for those who lead normalization with the occupation” & “normalization is a knife within the back of the Palestinian citizens.”

Member of the Islamic Jihad Movement’s political bureau Khaled Al-Batsh renewed the Palestinian citizens’s condemnation & rejection of the settlement, calling on the UAE to withdraw its recognition of Israel immediately.

Hamas movement leader Mushir al-Masri discussed during this demonstration on behalf of the different factions’ chiefs that the Palestinian citizens described the declaration of the settlement as “a black day for our citizens & cause.”

“The settlement is a overall betrayal of the Palestinian cause & an unpardonable diplomatic action that no 1 forgives. It’s a stab within the back of the Palestinians & imparts free solutions to the occupation,” al-Masri stated.

Rallies also occurred in some of the West Bank cities.