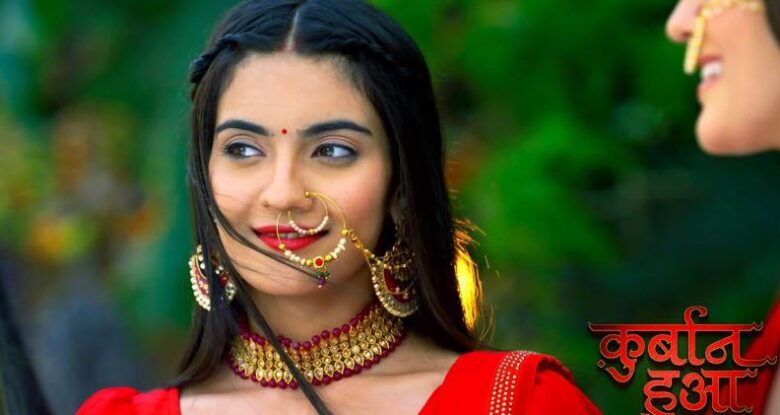 Today’s Written Episode: Qurbaan Hua 2nd January 2023 Daily Serial Starts With Chahat and Neel are sitting when they both hear the call of Muslim prayer to Azzan everyone is shocked on hearing the call and Vyas jee looks angrily at Chahat.

Meera is not able to bear the pain so throws away the Diya at which Neel exclaims that she could not even bear the pain for just a little while Chahat on the other hand cut herself and bared the pain just to make sure that Vyas jee is able to regain his health, he mentions.

But he cannot witness that she is trying to do anything for the sake of his family so how can he let her become a member of this family. Neel turns saying that he knows how he has wronged her but he cannot come with her to Canada as he can never leave Kripa and Vyas jee so she should then go back to her house in Delhi and even he would book the tickets for her.

Meera tries to stop him however he explains that he is not fit for her and she should spent her life with the person who cares for her and is just like her, Neel leaves the room, Godamabri and Naveli both standing in the corner think of how they should stop Meera from leaving, Naveli rushes to her explaining how she should not pay any heed to what Neel said because he is doing this because of Chahat.

Naveli explains how Chahat even blamed her for being pregnant and so they should make a plan to send Chahat away from the house. Chahat is taking off the clothes and she is really angry with Neel, she cannot understand what he desires as he has not been able to express his feelings which has created a lot of confusion, Meera comes to the terrace immediately snatching the clothes from Chahat.

She mentions how she was going to give them to the launderer however Meera responds how there is no need since she is going back to Delhi, Meera then exclaims that she desires to hold a small party before she leaves as it is also the new years eve, Chahat is however tensed but agrees to talk with Vyas jee, Meera hugs her, Naveli takes out her face from behind the curtain, Meera signals her to explain that their plan has been finalized.

Chahat enters the room where she finds a present wondering for whom it might be, Neel comes from behind exclaiming that he brought this for her as a token of appreciation for helping Vyas jee, Chahat responds how she came to know that he has asked Meera to leave, Chahat pleads with Neel to reveal what is in his heart as his actions have created a lot of confusion, Neel remembering his dream refuses to reveal how much he loves her.

Neel forces Chahat to take out the present. Chahat opening the box is shocked to see that it is a western dress, Neel mentions how she has to wear it in the farewell party for Meera, Chahat is hesitant but Neel says that the theme is for a western party so she has to wear it, He makes her promise mentioning how beautiful she would look in it, so he leaves before she can say anything else.

In the night Meera is preparing for the party when Baleq and Naveli, Meera cannot believe how beautiful they both are looking, she calls them to join her. Neel says that she has not seen Jamuna and Godamabri, everyone is shocked to see how beautiful they both are looking, Meera exclaims how Godamabri is looking like an Bindu however Godamabri exclaims she has taken the attire of Sharmila tigor.

Jamuna mentions how he has also changed his attire and would even dance but they should first eat, then they all start eating, Meera exclaims how it was a blessing that Vyas jee had a pooja in the Mandir and he would be there for the entire night, Meera says how she would serve him a samosa but she accidentally drops the glass.

Neel turns to get the napkin when he sees Chahat coming down from the stairs, he is not able to take his eyes of her, she comes close to him so he asks why is she so tensed when she is actually looking really pretty, Chahat exclaims how she would not be able to come in front of Vyas jee dressed in these clothes, Neel explains how Vyas jee would not come before morning.

Chahat doesnot want to celebrate without him however Meera pleads with her to not spoil the party. Godamabri also mentions how it is really hard for them to dress with their own choice and how she also used to wear modern dresses before her marriage. Jamuna mentions how it was really scary to watch her.

In the kitchen Meera asks Naveli that she has kept the party because of her not knowing about the plan, Naveli mentions that she has cancelled the Hawan so Vyas jee would be coming soon and she has ruined the dress of Chahat so he would see her clothes coming off which would ruin her reputation, Meera then asks everyone to come on the dance floor and when the start the dance everyone gets jealous after watching them.

Meera exclaims that Neel is always able to help Chahat from being ashamed, she vows to not give up until her plan is fulfilled, she asks everyone to sit down as they would play a game where she would pass the pillow and anyone who gets it would have to entertain them. Godamabri mentions how she has played the game many times.

Meera starts the game and they start passing the pillow and it finally stops at jamuna, Meera asks her to entertain them, Naveli advises him to recite any quote for Godamabri, Jamuna also exclaims that he cannot leave any chance, when he starts reciting the quote everyone starts laughing. Vyas jee also comes back.

He is amazed that the pooja ended so quickly as he forgot that Achara Vishwaiyant is coming as when he visited them before he exclaimed how his house was the best house with respect to religion. Chahat appreciates Neel for always helping her whenever she is in any kind of trouble exclaiming how he helped correct the Zip of her new dress.

Meera thinks that she cannot bear how Chahat is laughing with his boyfriend Neel and so she would make her pay, Meera sees Vyas jee so thinks that it is most opportune as now she would reveal the truth of Chahat being a Muslim in front of the outsider, Meera comes to Chahat asking for her mobile as the battery of her own mobile is low, Chahat hands it to her, Meera plays the call to Azzan from her mobile hearing which everyone gets shocked and stands up, Vyas jee also enters the house with the Pandit and everyone gets tensed seeing how angry he will get. Meera smiles while Vyas jee looks angrily at Chahat.