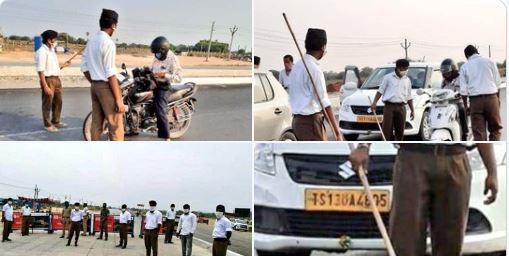 Pictures of lathi-wielding folks of Rashtriya Swayamsevak Sangh (RSS) standing at a street near Hyderabad & assessing the identity of commuters have gone viral on social networking, sparking a row.

.@KTRTRS Sir, Why are you silent on this issue of RSS workers with sticks manning police check post in Telangana, people are asking whether @TelanganaCOPs also outsourced to #RSS….? Please break your silence.Need a rejoinder on this serious issue from @TelanganaDGP. pic.twitter.com/qFKNGBXWUf

They advocated that the Telangana govt and also the authorities to describe as to why the company was given this ability to patrol the street see files of drivers.

“Sir, Why are you silent about this particular issue of RSS people from sticks manning authorities seen in Telangana, taxpayers are inquiring whether it was on April 9 that Friends of RSS with its own Twitter manage posted images of baton-wielding RRS volunteers standing near a barricaded highway & assessing the records of their commuters.