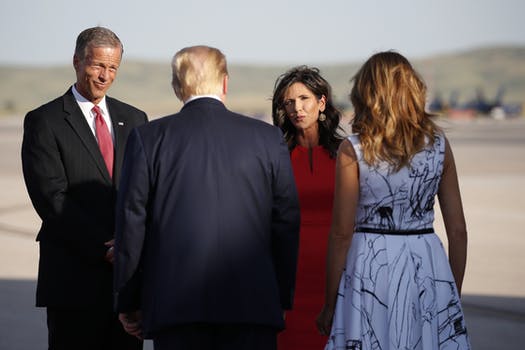 WASHINGTON – Since the first days after she was elected governor of South Dakota in 2018, Kristi Noem had been working to ensure that President Donald Trump would come to Mount Rushmore for a fireworks-filled July Fourth extravaganza.

After all, the president had told her in the Oval Office that he aspired to have his image etched on the monument. And last year, a White House aide reached out to the governor’s office with a question, according to a Republican official familiar with the conversation: What’s the process to add additional presidents to Mount Rushmore?

So last month, when the president arrived in the Black Hills for the star-spangled spectacle he had pined for, Noem made the most of it.

Introducing Trump against the floodlit backdrop of his carved predecessors, the governor played to the president’s craving for adulation by noting that in just three days more than 125,000 people had signed up for only 7,500 seats; she likened him to Theodore Roosevelt, a leader who “braves the dangers of the arena”; and she mimicked the president’s rhetoric by scorning protesters who she said were seeking to discredit the country’s founders.

In private, the efforts to charm Trump were more pointed, according to a person familiar with the episode: Noem greeted him with a 4-foot replica of Mount Rushmore that included a fifth presidential likeness: his.

But less than three weeks later, Noem came to the White House with far less fanfare — to meet not with Trump, but with Vice President Mike Pence. Word had circulated through the Trump administration that she was ingratiating herself with the president, fueling suspicions that there might have been a discussion about her serving as his running mate in November. Noem assured Pence that she wanted to help the ticket however she could, according to an official present.

She never stated it directly, but the vice president found her message clear: She was not after his job.

There is no indication Trump wants to replace Pence. Trump last month told Fox News that he’s sticking with Pence, whom he called a “friend.”

Yet with polls showing the president trailing Joe Biden, the presumptive Democratic nominee, and Republicans at risk of being shut out of power in Congress, a host of party leaders have begun eyeing the future, maneuvering around a mercurial president.

Sen. Tom Cotton of Arkansas was in New Hampshire late last month, Sen. Rick Scott of Florida is angling to take over the Senate Republican campaign arm to cultivate donors, and Rep. Liz Cheney of Wyoming is defending Dr. Anthony Fauci, the government’s leading expert on infectious disease, while separating herself from Trump on some national security issues.

At the same time, Secretary of State Mike Pompeo is attempting to shore up his conservative credentials by pushing a hard line on China, and Sens. Ted Cruz of Texas and Rand Paul of Kentucky are attempting to reclaim their standing as fiscal hawks by loudly opposing additional spending on coronavirus relief.

Drawing less attention, but working equally hard to burnish her national profile, is Noem. The governor, 48, has installed a TV studio in her state capitol, become a Fox News regular and started taking advice from Trump’s former 2016 campaign manager, Corey Lewandowski, who still has the president’s ear.