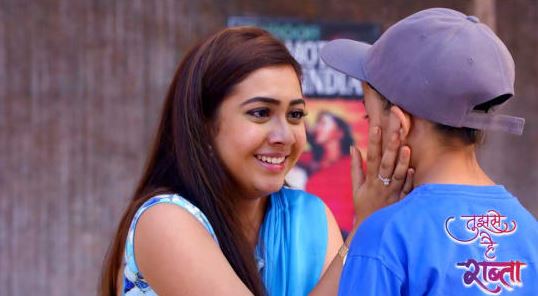 Malhar says jhinjhin jhinak…Kalyani holds Malhar from falling and takes him inside the bedroom. Pawar asks the sketch artiste to give the sketch to Malhar.

Kalyani records her statement in the camera that she is responsible for Aahir’s death and used that boy to murder him.

Malhar gets Pawar’s call who asks him to see the sketch. Malhar sees the sketch and tells that this is the advertisement boy’s pic. Kalyani tells Moksh that his baba wouldn’t remember anything and he was in the influence of orange juice (wine).

Malhar tells Pawar that the guy fooled them for money. Moksh asks where is she taking him? Kalyani says she is taking him far so that he don’t have to hide his identity infront of anyone, where he don’t need to be locked in the storeroom.

She promises him that he will get all the opportunities which he deserves and he will become a big man. Moksh asks if more big than Amitabh Bachchan. Kalyani says more big than him. Moksh asks Aai fi, will you be with me.

Kalyani stops the car and thinks whatever she is doing is for his betterment. Malhar feels his head heavy and thinks what did she add in kada. Anupriya comes there and asks what happened? Malhar tells about the heavy head. Anupriya says she will bring.

Malhar gets CD of Kalyani for him and thinks why did she leave it for me. Sarthak comes there and asks him about Avni’s doctor’s number. Kalyani takes Moksh to a hostel and tells him that the bed is small, so she will ask father to accommodate big bed for him.

She kisses him and goes out. Moksh sits down on the bed to have icecream. Malhar returns after giving medicine to Avni and thinks Kalyani haven’t come till now. He plays the CD. Warden asks Moksh to put the bedsheet on the bed.

Kalyani asks the father to ask warden not to be strict with Moksh. Father says warden has to be strict with the kids as we taught them to be discipline and strong. Kalyani says I want to meet him for last time.

Father says if warden sees you then will come to know that he is DM’s son. Moksh changes the bedsheet and asks where is my Aai fi? Warden says your Aai is left and you have to stay here with other kids. Moksh says my Aai can leave me.

Moksh runs out of the hostel and runs behind Kalyani’s car. Watchman asks Moksh to go inside. Warden takes him inside. Kalyani cries while driving the car and stops. Moksh says I will not talk to my Aai fi. Moksh opens the bag and keeps his books in the rack.

She runs inside. Anupriya tells Kalyani that she got her daughter and she is alive. Kalyani finds Mukku dressed as a girl. Anupriya says she is Sarthak and my daughter. Kalyani asks what happened to Aai? Sarthak says she can’t be our daughter.

Whom Mukku calls Amma. Sarthak shouts Vivek Deshmukh. He asks Aao Saheb if she knew about it. Anupriya tells that a mother can’t be wrong and whenever she is near her, she felt the connection. She says this is our daughter and reminds him of his dreams for their daughter. Sarthak looks on hopeful.