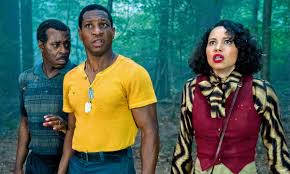 On Sept. 16, 1968, 51 years before HBO aired the first episode of its groundbreaking horror series, Carol Jenkins found herself in Lovecraft Country.

Jenkins, a 21-year-old door-to-door encyclopedia saleswoman, sprinted away from a pack of bloodthirsty monsters chasing her through the tiny streets of Martinsville, Ind. She ran for the first home she could find and banged on the door. A white couple answered the door and called the police. When officers arrived, they assured Carol that there was nothing to worry about; there were no monsters in their town. Breathing a sigh of relief, Carol decided to walk the few blocks where her fellow encyclopedia salesmen would meet her and take her home.

This time, the monsters caught Carol.

One of the beasts held her arms, while another pierced her heart with a screwdriver. Police found Carol’s body but wouldn’t bother to arrest Carol’s killer for four decades, despite the Jenkins family’s pleading with the Martinsville Police Department to enlist the FBI in their search for the monster.

Thirty-four years later, Carol Jenkins’ family would discover that the monster’s name was a longtime Martinsville resident with ties to the Ku Klux Klan. The alleged culprit was Kenneth C. Richmond, a man with a history of “bizarre behavior” who lived on a sprawling farm just outside the town.

According to Richmond’s daughter, who later admitted to witnessing the brutal murder, Richmond said Jenkins “got what she deserved.” Richmond was later declared “mentally incompetent” and never faced a trial. His accomplice was never identified.